This episode is a doozy of an hour, with some fantastic action and tragedy. 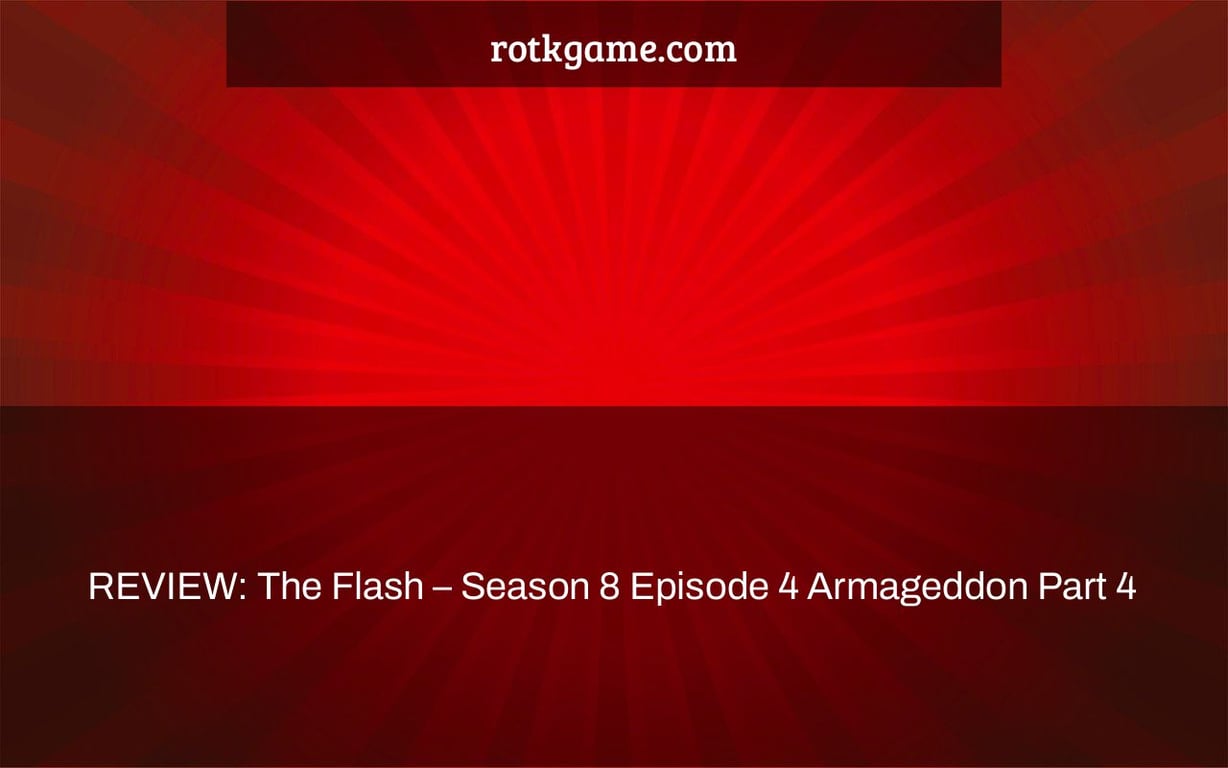 “Armageddon Part 4” is a largely excellent episode that kicks itself a few times too many times. The ongoing Armageddon storyline takes a surprising turn, and the wacky shifting alliances of an alternate future make for some entertaining scenes between former foes, but it focuses too much on some of the supporting characters and their relationship drama, skipping over some key story beats in the process.

Barry, now stuck in a dark future, uncovers the mastermind behind the cataclysmic situation Despero is attempting to avert. Only one of the Arrowverse’s most powerful villains can rescue Barry’s world. I can’t picture anybody caring about characters that speak endlessly about their love life, or lack thereof.

Last week’s cliffhanger thrust Barry into one of his darkest nightmares: a future in which all of his allies have turned against him and Iris is marrying Eobard Thawne, his archenemy. But the opening sequence of “Armageddon Part 4” – which is really a continuation of the previous episode’s climax – throws Barry another curveball: Thawne is the Flash in this reality, and he is the devil in yellow. When the speed-powered battle begins, Team Flash rallies behind Thawne, adamant that Barry is the evil guy, that he murdered Cisco and the Legends, among others. The battle is OK; it establishes that Barry’s pals are now supporting his adversary, but it’s one of those A-to-B bouts where individuals with abilities hold back because the narrative must be told. If you’re battling someone who can travel at light speed, instead of congratulating yourself on the back for zapping him with some ineffective ray gun, you should knock him out while he’s down. However, it has the desired effect on Barry: he realizes that he is entirely alone.

The why, on the other hand, is fascinating, and “Armageddon Part 4” cements the Reverse-Flash (the actual one, not Barry) as the finest villain in this reality. After his defeat in last season’s finale, Thawne learned that Barry was quicker than him, so he reengineered the timeline once again, this time making himself the one hit by lightning in the particle accelerator explosion – the one who became the Flash. And he exploited Barry to create the Reverse-Flash, a villain who would give legitimacy to his heroics, more for amusement than for any practical cause. All of the acts of violence that everyone assumed Barry was performing, as well as Joe’s murder, were Thawne framing Barry, sowing the seeds for his ultimate descent into evil. And here I was thinking it was Despero who was arranging the chess pieces the whole time.

This is amazing; Thawne makes sense as the one behind Barry’s “turn,” and becoming the Flash is a natural extension of his obsession with him. His desire to obtain the Flash’s ability is what led him to villainy in the first place, and it has now devoured him to the point that he has transformed himself into the Flash. The rest of Barry’s life — his love for Iris, his friendship with Team Flash, and his membership in whichever version of the Justice League they name it – are all ancillary to his newly adopted image. But below, the monster Eobard Thawne will always be, the wolf in sheep’s clothing who has doomed a whole universe by his hubris, is apparent only to Barry as he gloats. While Barry and Despero discuss the immediate and broader good, Thawne ignores both and simply serves himself.

But the most vexing aspect of Thawne’s diabolical scheme is that it effectively turns Barry into the villain, and it does so by exploiting his faith in the immediate good. Barry discovers a means to erase Thawne’s time tampering, but it requires him to go back in time — using a sophisticated sci-fi device – but he made a mistake when he requested Black Lightning to take away his abilities. While Jefferson finally persuaded Barry not to give up his speed, the process had already started, and Barry is no longer as swift as he once was. He’ll have to sprint around the equator to produce the speed he’ll need to time travel, but doing so for as long as he’ll need to will cause the Earth to explode – in other words, he’ll accomplish exactly what Despero claimed he’d do. Barry might have avoided the whole Armageddon scenario if he had listened to his friends and had a little more trust in himself; unfortunately, his self-doubt will make him the destroyer of humanity.

So, once again, “Armageddon Part 4” forces Barry to choose between the immediate good and attempting to reverse Thawne’s manipulations in the hopes of saving the world, or the larger good and allowing Thawne’s triumph to stand in the hopes of ensuring the planet’s survival. Damien Darhk, an unusual source, provides his response in this instance. I was thrilled to see Darhk return; despite being wrecked on Legends of Tomorrow, he was fantastic on Arrow, and I’m always happy to see Neal McDonough show up everywhere. Darhk is back to his old homicidal nature in this reality (rather than behaving like a high school bully; post-season-1 Legends is terrible), and he first agrees to aid Barry since he thinks he’s a fellow evil. But when he discovers the truth – and I like that they showed Darhk questioning Barry almost immediately rather than making him appear like an idiot – Barry is able to appeal to his humanity, particularly his love for his daughter, who is no longer alive. Now, both Barry and Darhk want to regain a loved one, and they’re both willing to reverse the gift for a female. Because you can feel Darhk’s love behind his terrible appearance – a good contrast to Thawne’s inner demon busting through the heroic mask he wears — this one episode, this one plotline, is better than all of last season’s villain-redeeming bullshit.

At “Armageddon Part 4,” love is the secret, and like The Flash’s ethical dilemmas, Iris as Barry’s constant is a tried and true trope that resurfaces in one of his darkest hours. When Barry’s abilities aren’t enough, when Reverse-Flash is closing in on him, when the world is about to end, the leap of faith Iris makes for him, the love a marauding time traveler can’t take away, is what saves him, what gives him the courage to carry out his impossible plan. Thawne’s scheme to steal Barry’s lightning was bound to fail since Barry’s lightning rod would always be Iris. Similarly, Damien Darhk is willing to destroy a world in which he is alive and well as a wealthy and powerful figure because he believes he has a chance, however small, of saving the daughter he thought he’d lost forever; like Iris, Nora (another Nora? There are other names, guys) is Darhk’s constant, bringing out the best in an otherwise evil man. That is why Barry and Darhk thrive while Thawne fails; Thawne lacks consistency, and a guy who only cares about himself can never genuinely be loved by others. To persuade Iris to fall for him, he had to deceive, but Barry’s honesty in the face of Thawne’s falsehoods won her back. Eobard Thawne is alone, and he must now watch as his ideal world crumbles around him. Of course, he’s not finished yet; there’s still one more episode of Armageddon to go.

Doesn’t that sound fantastic? Yes, it is! However, in “Armageddon Part 4,” there is another plotline that takes up much more screen time than any competent writer would have given it, and it significantly slows down an otherwise fantastic episode. Chester and Allegra, everyone’s favorite will-they-won’t-they couple, get their own obnoxious love story, and all of the guest stars (except Batwoman, who is now Iris’ best friend because they wanted as much crossover power as they could get but couldn’t think of anything else for her to do) are swept up in it. Allegra claims that she and Chester slept together once, but he vanished the next morning, so she went on with her life. Alex Danvers is disappointed by this since they’re so Ross and Rachel, you guys! So she interrogates Chester as if their ten-year love relationship is any of her business, and he gives her a different narrative about going out to fetch breakfast and finding Allegra gone. You get the idea; they love one other but are terrified of being together because, well, whatever, and they end up getting together because, well, who cares, and love triumphs over the coffee that is trying to keep me awake. Ryan Choi (remember him from “Crisis on Infinite Earths?”) was there as well. (I’m not a fan of this character, but they want us to feel he’s essential) joins in the ennui, turning from a cynic who doesn’t believe in love to single and eager to mingle. Caitlin picking up the Allegra/Chester combination from the perimeter and gazing over with a “Huh?” face is the finest part of this. Caitlin Snow, may God bless you.

Who do you think would have benefited more from this screen time? Despero. Despero has slain everyone on Team Flash save Cecile, whose psychic talents he plans to use to locate Barry when we return to the present towards the conclusion of “Armageddon Part 4.” It’s a nice image that helps illustrate Barry’s mission’s urgency, but it might be better. Imagine if, instead of two barely-characters stammering in each other’s company, the program went to 2021 and showed Desepero methodically slaughtering Barry’s pals one by one, arranging them for Cecile when he seized her alive. We’d see what Barry couldn’t, and we’d know there’s more to his choice than merely sustaining Thawne’s reality. It would also help contrast the key characters’ diverse behaviors and goals by mixing Despero in with Barry, Thawne, and Darhk. I understand that the CW enjoys their soap opera melodrama, but it shouldn’t come at the price of the storyline.

“Armageddon Part 4” provides a satisfying conclusion to the Armageddon narrative, reintroduces several old Arrowverse villains, and explores a few of the show’s major ideas in fresh and intriguing ways. However, a needless romance subplot hinders the story’s pace while simultaneously sidelining one of the five-essential parter’s characters.

“Armageddon Part 4” provides a satisfying conclusion to the Armageddon narrative, reintroduces several old Arrowverse villains, and explores a few of the show’s major ideas in fresh and intriguing ways. However, a needless romance subplot hinders the story’s pace while simultaneously sidelining one of the five-essential parter’s characters.

“The Flash – Season 8 Episode 4 “Armageddon Part 4″”, is the latest episode of The Flash. It was released on October 26th, 2018 and is the final installment of this season. Reference: the flash season 8 episode 4 release date. 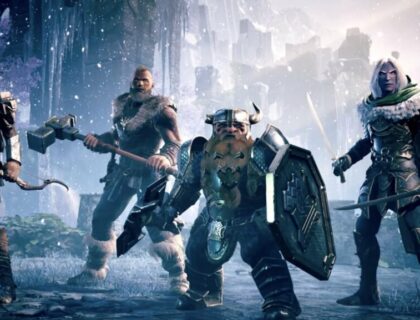 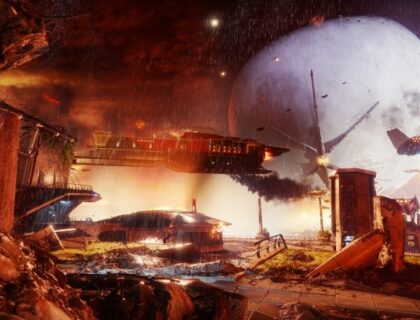