REVIEW: Hawkeye – Episode 6 “So This is Christmas?”

“So This is Christmas?” finds the team finally coming face to face with their biggest enemy: time.

Hawkeye is a new TV series set in the Marvel Cinematic Universe. It follows Clint Barton, also known as Hawkeye, an archer and member of the Avengers who takes on missions that are not related to saving the world. 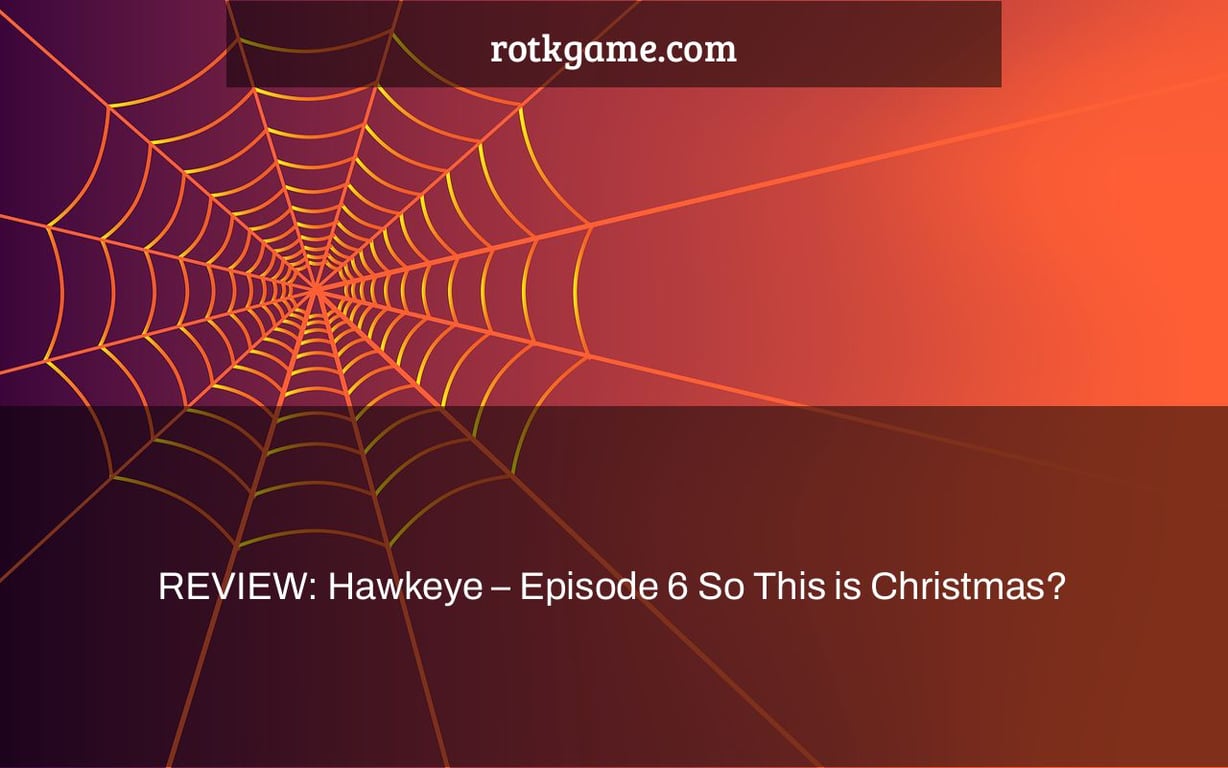 “So This Is Christmas?” is a suitable climax to the miniseries in that it has a few excellent moments and a better tale straining to burst through, but it’s mired in a quagmire of monotonous plotlines, weightless action, unsatisfactory character journeys, and some of the laziest combat sequences this side of Iron Fist. Hawkeye hasn’t been a really terrific show, but it certainly deserved more than this conclusion.

Clint and Kate struggle to rescue Eleanor from the Tracksuit Mafia’s mastermind. Maya plans her own revenge against her father’s actual murderers as Yelena prepares to avenge Natasha.

From then, it’s all downhill. Everything after it seems hollow, from the narrative to the people to the action, in particular. The majority of “So This is Christmas?” takes place during the Bishop Christmas Party, which happens to be hosted at Rockefeller Center and serves as a focal point for all of the essential actors to gather for the big confrontation. However, these individuals have so little going for them that you never get the impression that the tale is coming to an epic end. It’s difficult to care when people come up. Even last week’s revelation that the Kingpin is behind all the shady operations fades rapidly since they do so little with him. There’s an initial pleasure in seeing Vincent D’Onofrio reprise his role as Wilson Fisk, and he tries his best to make the most of his opportunity, but this could have been any gangland lord. Fisk has a great fight with Kate towards the end – and I’m pleased they didn’t do the normal current thing and have Kate wipe the floor with him – but the two have no history, so it’s just a fight for the purpose of having a fight. Fisk, played by D’Onofrio, is a fantastic character, yet this program is so much beneath him that he’d never notice it.

The remainder of the characters, on the other hand, do not fare much better. Maya’s narrative takes the predicted turn of her pursuing Kingpin and Kazi when she was supposed to be the major villain, but they couldn’t even make it compelling. Instead of taking some righteous vengeance for her father, she has a dull, useless talk with Kazi before sadly murdering him; why is the girl who intended to gut Ronin like a fish suddenly so forgiving of one of the guys behind it? That’s a mistake, too, since I doubt she murdered Fisk (she must not have!). Meanwhile, Yelena has moved on from the previous episode, when Kate persuaded her to investigate her bosses’ reasons for sending her after Clint. She’s out for vengeance once more, and after a scene with Kate that made me feel bad for both of them (a desperate struggle by Kate to save her friend from an assassin hell-bent on killing him turns into a slapstick farce that makes them both look like idiots), she stops short of killing Clint and asks him about Natasha’s death. There are no points for predicting whether they will be able to sort things out rather than murder one other.

Much of this might have been avoided if Hawkeye had been made into the program it deserved to be. I understand that Marvel goes to great pains to link things, but here is an example of how it detracts from a tale. Every second spent on them might have been better spent on Maya, who was supposed to be the major antagonist. She plays a lady who has been mistreated by Hawkeye and is seeking vengeance, and she does it better than Yelena since Clint is the one who killed her father. He didn’t murder Natasha, so it’s difficult to empathize with Yelena after a time, particularly now that she realizes she’s being duped. And Kingpin isn’t required since the bigger scheme that led to Maya’s father’s death is superfluous and dilutes Clint’s responsibility for his actions. Why was Maya’s father the thug Clint was duped into assassinating? Clint isn’t atoning for anything since he’s being blamed for things that weren’t his fault, thanks to this and the Yelena storyline. Clint vs. Maya, a hero confronting the monster he created out of a loving daughter, finding himself reflected in her because she is in the same misery as he is. “Look, it’s the person from the other stuff!” we were told instead.

Even so, we wouldn’t have been spared the Tracksuit Mafia or the drab action sequences. “So This Is Christmas?” has trick arrows and martial arts bouts, but none of them are more thrilling than watching the second hand on your watch tick past. The trick arrows have outlived their usefulness, and making them the focal point of the huge conflict detracts from what should have been a bloody arrow battle. The Avengers-style pan around Clint and Kate is also a dud, since even if their relationship had been more developed, it wouldn’t have been nearly as amazing or profound as the thing it’s emulating. It’s made worse by the fact that their opponents are the Tracksuit Mafia, who never appear to pose much of a danger, making the main fight seem like a video game lesson. Some major narrative lines are also left unresolved. Remember how Maya instructed Clint to abandon his hearing aid in combat and trust his instincts? That never comes up again, and despite how big of a fuss they made of it, the hearing aid itself is never referenced. While I’m pleased the LARPers were only involved in a little way, it does make you question what their purpose was. Clint’s wife Laura, who worked with SHIELD in the past, reveals out to be the owner of the watch. In other words, since Laura was a spy, the possibility that Clint met a small-town girl and lived a regular existence aside from his heroic job is diminished. And there’s no explanation for why the Tracksuit Mafia needed the watch, so this is another another pointless narrative.

“So This Is Christmas?” makes effective use of its location, in my opinion. Christmas is on full show in New York, and it becomes a part of the activity. Clint rescues himself from drowning by being entangled in the Rockefeller Center Christmas Tree (and I’ll confess, the owl – and Clint’s response to it – made me laugh), which leads to an arrow shootout on the famed ice skating rink just below it. Sure, the setting stinks, but I like how they made use of their historic surroundings. The battle between Kate and Kingpin takes place in FAO Schwarz (which, after closing its Central Park East location a few years ago, now resides in Rockefeller Center, so the geography makes sense). Clint bringing Kate home for Christmas with his family, suggesting that she is now a member of the Barton clan, was also a highlight for me. But then they had to destroy it with that last sentence, implying that she is now officially Hawkeye, rather than just his new sidekick. I know it occurs in the comics, and it doesn’t bother me; his retirement wasn’t planned, particularly since the hearing aid subplot was scrapped totally, but their collaboration was, and now that’s been tossed out the window for yet another idiotic legacy hero tale. Indeed, have a very Merry Christmas.

“So This Is Christmas?” is a drab, disappointing conclusion that emphasizes Hawkeye’s bloated status. The action is banal and uninteresting, and the ultimate message is more of a threat than anything else. Characters from prior MCU projects are squandered and degraded. This Christmas, Marvel put coal in our stockings.

“So This Is Christmas?” is a drab, disappointing conclusion that emphasizes Hawkeye’s bloated status. The action is banal and uninteresting, and the ultimate message is more of a threat than anything else. Characters from prior MCU projects are squandered and degraded. This Christmas, Marvel put coal in our stockings.

Why Is My Screen Mirroring Not Working On My Iphone?

How To Stream On Twitch On Mac?